This is long email. Please bear with me. (Or just click here to support us and read the update later.)

In order to end gerrymandering in Wisconsin we need to pass a redistricting reform bill.

But Speaker Vos and his cronies won’t even have a hearing, let alone a vote, even though many Assembly Republicans have now co-sponsored our reform bill, AB303.

So we’ve been engaging the grassroots. We’ve been educating the public all across the state through town halls, letters to the editor, and public education events.

And we’ve had tremendous success. We’ve built a tremendous coalition, more than 15 groups strong, representing hundreds of thousands of members.

Grassroots activists across the state have gotten 50 counties to pass resolutions calling for reform, and eight counties have passed referendums. These resolutions and referendums demonstrate that people across the political spectrum, from north to south and east to west, all support fair elections and a stronger democracy.

So here’s what’s next: On Tuesday, April 7, six more counties across the state, along with nine towns in northern Wisconsin, are voting in their own referendums. We have tremendous momentum.

In fact, that momentum has gotten us noticed. Speaker Vos and his cronies are getting worried, and they are telling their followers to stop us. They got the Manitowoc County Executive to veto a board-passed referendum, stopped us in committee in Racine, and voted down the referendum in Ozaukee yesterday.

But these aren’t losses — they are wins. Because now, even more people are paying attention. 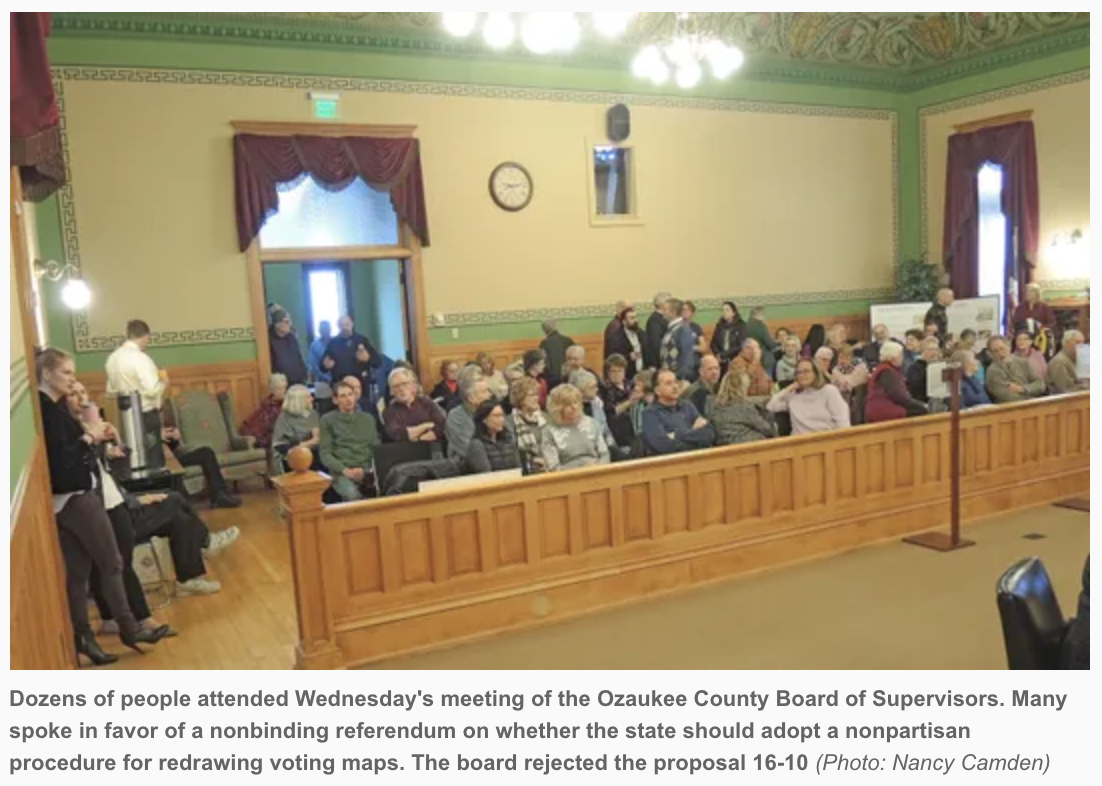 In fact, 70 citizens showed up at the Ozaukee County Board yesterday, dozens came out in Racine last week, and news coverage of our issue is growing. In fact, I think we’re getting more coverage because the anti-reform crowd is resisting our grassroots power!

We need to keep up this action in Wisconsin, because this is ground zero for our nation’s political fights. If we can keep winning here, it makes a difference everywhere. All eyes are on Wisconsin, with a national convention coming and with the state sure to be a huge and pivotal battleground in November.

Let’s use that attention to restore our democracy. Click here to help us with a contribution today.

And please, click here and check out this great coverage of the fight in Ozaukee County.